Francesca Gavin is prolific when it comes to her work as a curator, writer and editor. As the Visual Arts Editor at Dazed & Confused, she also writes for other publications including Another and Kaleidoscope. This comes on top of a bevy of influential publications that she contributes for, plus a significant art collection she cultivated for Soho House Group when she worked as their curator. But what lies underneath the professional aura is someone who has experienced a vibrant and effervescent life. She talks with Daniel Kong about inheriting her mother’s postcard collection at age nine, what experiencing sexism has taught her and why she considers herself a nerd. 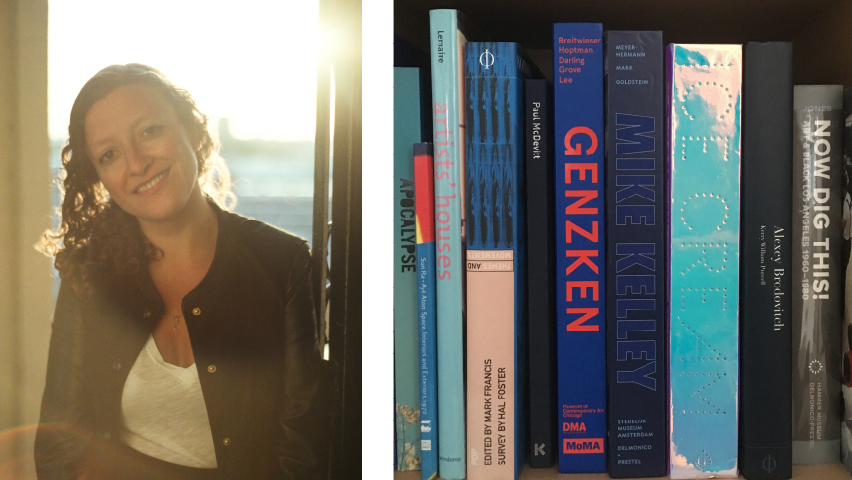 You’ve established yourself as one of London’s most influential art editors. Were you the sort of person who always excelled in school?

I was obviously a nerd – completely and utterly a nerd! But a very unusual one. I always did very well in school, I was always very academic, and I got scholarships to really good schools when I was younger. However at the same time, I wouldn’t say that I’m the most diligent person on earth. What drives me is my enthusiasm for culture. I’ve always been obsessed with books, magazines, music… I even learned to read music before I even learned to read! So I’ve always been really culturally interested. This is probably because of my parents – my mother was a writer who went to art school and my father was an actor and a singer.

What was it like to live in a very cultural and creative household?

Growing up, I didn’t have anything to rebel against! Music was always very present in my relationship with my dad. And I’ve always lived with a piano, whenever I can. I would sing with my father, and I’ve been playing piano since I was three.

But with both my parents, the things that connected us were politics and their love of books. So we always had an overwhelming number of books about everything in the house. From the occult, to cookbooks, to art books, I definitely think growing up and wandering around my parents’ bookshelves was a huge influence.

What would a typical dinner at the family table look like?

I’m a child of the 80s, so we didn’t really sit down for dinner that much. Me and three sisters, we’re all Scorpios. We were probably a handful and it was always a little chaotic. But also, I always felt like I was treated as an engaged adult. I was always treated as someone with an intelligent point of view since I was a child.

To be honest, my family are the most interesting people. I still adore my mother and my sisters, and am constantly interested in their heads. They have very unusual reference points. One of my sisters is an artist and the other one is in the film industry. I’m a bit obsessed with my family’s brains, so we all connect really nicely. It’s a very unusual and bohemian family. 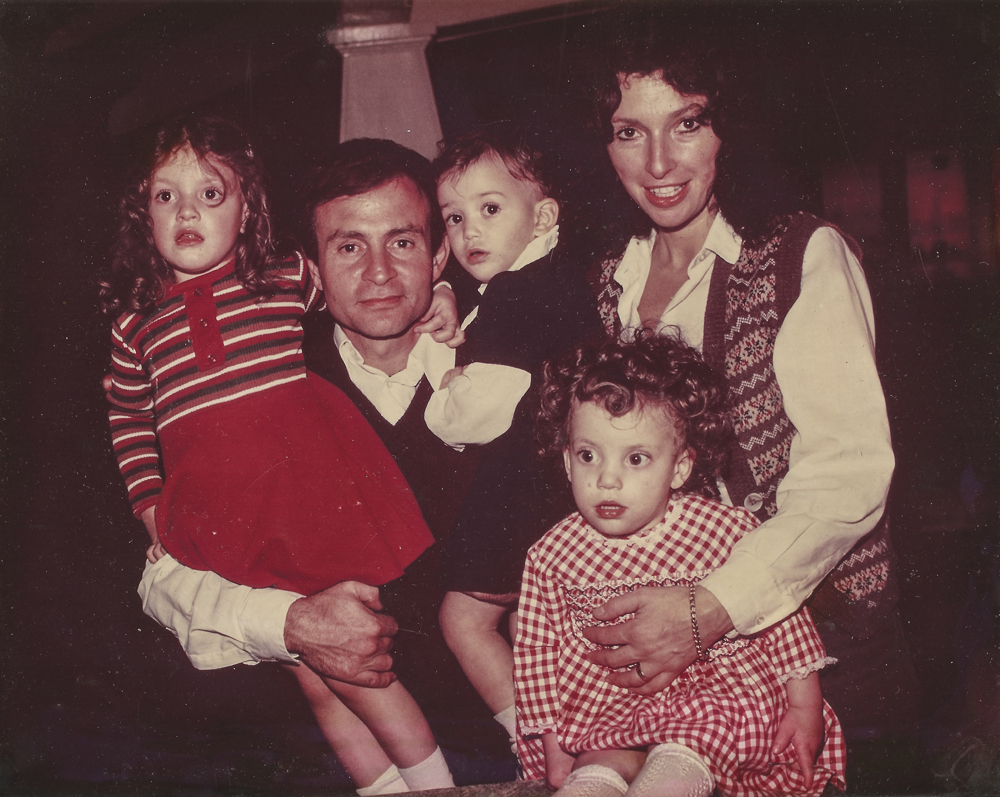 We were living in Los Angeles at the time between the ages of three and five, and my mum suggested I go to a Suzuki school on the weekends. So I learned chord structure and how to read music before I was even at kindergarten at five years old. So I’m really good at sight reading. Even as a teenager at school, I would always be at the music rooms to practise in. I would often sneak off on our lunch hour break and play Mozart!

Music continued on from there, as I also sang for a long period of time when I was older. I would sing jazz and blues. I would do this just to earn a living when I was a teenager, playing at Harrods, hotels, restaurants or underneath the Everyman Cinema.

In Woodstock Elementary School, it didn’t really apply. Everyone was a bit weird, to be honest. Most of the parents were either drug dealers or worked for computer companies. So it was kind of a strange set-up. When I came to London with an American accent, I was enrolled at a girls school because I got a scholarship. At that time I was getting straight As and wearing awful hand-me-down clothes from my cousins. So for the first three years, it was really tough. I found it difficult and was very isolated.

But because of that experience, I became very fashion-conscious and saw how our fashion choices communicate with people – particularly in a girls’ school. Fashion was often connected to popularity – more than sex, more than being attractive. It was much more about how you connect with other people. I learned a lot from that process. That’s probably why I still like writing for fashion magazines. I’m very particular about nice things.

Growing up, did you have someone that you look up to or respected in the art field that also influenced your life’s path?

Not really. I’m a bit of a hustler in a sense that I’ve always felt that opportunities come to me. I’ve always been very lucky. I’ve always kept my fingers in different things, partly because I always think that you can’t be reliant on one. So no, I never had any one person. I also never got offered the right editorial job, nor any contacts when I began at all. I was just enthusiastic, friendly and smart. I had to create my own roles and it worked from there.

Even still, I look at people’s careers in the world that I’m in. There are some women I really respect like Emily King, Alice Rawthorne and Jennifer Higgie. But I can’t really see anyone’s career path and immediately identify that with mine.

At age nine, your mother gave you a collection of postcards. Did that influence you or spark an interest in art as well?

The reason why my mother gave them to us is because one day my sister and I were playing with stickers. My mum told us that stickers were ridiculous, and let us use her art postcards instead in the hopes that we’d learn something. And to be honest, I think it was enormously influential. It totally changed everything.

A selection of postcards

As someone who is passionate about working in the art world, you obviously love what you do. But what frustrates you the most about the work environment?

Well, you’re catching me in a really interesting moment, because I experienced sexism this summer. I co-curated a massive biennial called Manifesta and barely got credit for it. So that’s been a massive learning curve.

I’m actually in a bit of shock, because it’s something that I’ve never really experienced before. I’ve always felt women can do whatever they want, and you’re going to get credit for what you do. But then you realise it doesn’t really work that way, and that shocked me. I don’t want to dwell on it because I still really enjoyed the work and I’m proud of the work that I did.

But the experience of the event – resulting in people editing me out of the process, which has multiple reasons as to why it happened – it has made me very conscious as a writer and curator about crediting and making sure that everyone involved in a project gets attention in some way for what they do.

And before this happened, you never experienced sexism?

No, not really. I’m very straightforward. I’ve always gotten good work. I’ve always been credited for my work. I’m quite good at getting my own name out. But often, it’s been me publicising myself. Maybe it’s because I have a low voice and am strongly opinionated.

What advice would you give to someone else who might be going through a similar situation?

Definitely speak to your contemporaries. I have a lot of respect for the women in my industry for getting it out there. I did a great interview with AQNB about the incident, and I really felt there was support from other individuals in the art world.

As a self-proclaimed nerd, did you have a favourite teacher at all?

When I went to school for A-levels, I had an amazing history of art teacher called Kate Evans who was super feminist and really political. We studied 19th century French Art, and she was brilliant – definitely the best teacher I’ve had. I mean, to be honest, probably better than most of the teachers I’ve had at university. She was just a really great, engaged and smart woman. And so as a result of doing A-levels with her, there was no question about what interested me.

When you’re looking at artwork, I’ve learned through her that there are so many different ways to understand it. You can expand on it, whether it is through the artist’s biography, or the political context or the social context or technique. Art for me is part of the wider world.

Outside of art, I’ve noticed on Instagram that dance plays a big role in your life.

Yes, I love my hobby! I started dancing three years ago. And it probably took about two years before I even put a video online. It’s quite common when you’re studying commercial dance for music videos to film yourself. That’s how you learn to get better at what you do. I remember the first time when I decided that I was finally going to share my secret hobby to people. And now whenever anyone sees me at art openings, they are like: “I love your dance videos!”

It’s also really nice that I have things outside of the art world. I think that’s really important. And the great thing about moving your body is you use your brain less. I have a very cerebral work life, so it’s really wonderful to do something that uses my body.

Can you describe what happens when you’re listening to your favourite song?

It’s such a nice feeling. There’s such a sense of satisfaction. And also, the actual dancing is hilarious! Because you’re like… kind of doing the baby-Beyoncé-semi-Rihanna-slight-slut-drop. I mean, it’s ridiculous. It’s such a hyper-feminised way of being. It’s totally unlike my life in the art world. Plus the persona or role of what I do when I’m dancing – it’s just great!

And if you had to pick an element that best represents you and your personality, what would it be?

Can it be something effervescent? Probably. What fizzes? I would think of myself as something fizzy.

Yes, but maybe something more mineral than that. In my mind, when I think of my personality, it makes me think of effervescent powder in a glass of water. Not as glamorous, clean or tidy as champagne. Something a little bit more grounded. A mineral that you put into water that fizzes, bubbles and gets excited.

And that represents you because of your energetic nature?

Yes, I see myself as someone friendly and excited about things. I don’t know if it’s true, but that’s how I see myself. It’s not necessarily about how I look, because that would be a Cockapoo, a Cavapoo or even a Beagle-Spaniel breed. But as a personality and who I actually am, it’s fizzy.